When The Stone Shepherds Awaken: Book One, The Sabienn Feel Adventures 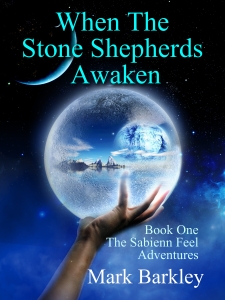 “I’m a freak”, Sabienn thought, catching the lemon whiff of the suicide pill in his hand. “Why’ve I been abandoned?” On a distant planet far off into the future, there is a human colony twice removed from Earth with a country preparing for war. Sabienn Feel is a military cadet being fast-tracked for promotion as their enigmatic head of state, The Great Leader, readies his armies for battle.

Sabienn’s world comes crashing down when one day he grows wings. And now people are trying to kill him.

He also finds out that not only him but thousands of men his age have grown wings around the world in keeping with a ten thousand year old prophecy. With his wings comes an intuitive ability to pick up an object and see a history of someone who held it. This ability has not gone unnoticed by higher powers within the realm.

When The Stone Shepherds Awaken is the first of twelve books in the Sabienn Feel Adventures.

Interview with the Author

Q – What inspired you to write The Sabienn Feel Adventures?

A – I’ve always loved the idea of the epic journey. I’m acquainted with the book Journey to the West but was more familiar with the TV series in the 80’s based on the book called Monkey. The idea of four souls travelling across a wide expanse of geography to complete a quest appealed to me. So I planned a series of twelve books to go from one place in the south of this space colony that they live on twice removed from Earth, to end up in the north, meeting danger at every turn.

Q – Why does your main character Sabienn Feel grow wings?

A – Good question. I wanted something very drastic to occur to these people physically. Something that would be difficult to hide and offer an immediate prejudice. The idea of growing wings constantly came up for me. There’s a Pearl Jam song I found inspiring that says, “And sometimes is seen a strange spot in the sky. A human being that was given to fly”. And in my mind’s eye, I could see this figure. Almost like the Led Zeppelin Icarus logo but with bat wings. But they couldn’t fly otherwise they’d hit the sky and the journey would be over in no time. I made them only able to swim because being submerged in water has elements of dealing with the subconscious. To me it satisfies all elements of those prophecy, fantasy, epic adventure type of stories that involve friendship and brotherhood.

Q – So, why should readers give these books a try?

A – Well I would say they were humour-filled, page-turning, epic, fantasy adventure novels which involve a quest. But then that’s what you would expect me to say. Why not try and read one of the books and let me know what you think? Some of the books are free so you’ve got nothing to lose.

Sorry if that sounded a little flippant. I’m immensely grateful that anyone is reading my books. And hopefully I can make them the best stories possible for my magnificent readers.