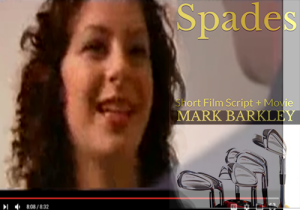 (“Spades” download includes your own copy of “Stories From The Distant Planet” also by Mark Barkley. Just turn to inner sleeve after the titles and click on the download links.)

Stuart and Claire have been married three years and in Claire’s eyes life is boring. She is a solicitor’s secretary who prides herself on being able to call a “spade a spade”, to tell the truth without embellishment.

In her eyes, Stuart shows more enthusiasm for golf than events that matter in their relationship. There is one day of the year where the couple compete for each other’s affections by attempting to humiliate the other.

The events of this short film open with Claire’s message on the refrigerator “TOMORROW IS..”. This is the day before that day. Spades was filmed in Brisbane on 2nd & 3rd December, 2000, with the second day riding up and down the Brisbane River in a hired ferry.

It was short-listed in the top ten films presented for the third annual Courier Mail What’s On Short Cut Film Fest. It was screened at the Brisbane Powerhouse, Newfarm, with all other finalists on February 2nd, 2001.

Interview with the Author

Q – Why should I read a short film script?

A – I think a good story is a good story. I try to reach out on an emotional level. And with this script, I don’t have to say it’s just a movie in your mind. There’s a link there to see the actual movie.

Q – What inspired you to write Spades?

A – Like my other plays, The Captains and The Kings, Sylvia Terry, A Kind of Belgium and Goodbye Melaleuca, I am fascinated by the dynamics within the family and in this case it involves a young married couple who like to play mind games with each other.

Also I was very interested in portraying a crime occurring where there are several witnesses and by-standers watching but no-one wants to get involved. There is a detached nature to the society here where people feel comfortable making excuses for their own inactions.

On the one hand, we have a woman on the river in the city night feeling unsafe and vulnerable. And on the other, there is a perceived betrayal of a victim to do the decent human thing to step in and help. Even though the problem was caused by the victim’s own irrational actions. But I wanted to do it in a way that involved humour. Also throw in drama, conflict and in a funny way, there is a love between Stuart and Claire.

Q – How was the filming?

A – It was the best experience ever. Few things compare with hiring a ferry and taking it on an adventure up and down the beautiful Brisbane River with the lights of the city night in the background. I was really fortunate enough to fall in with a group of people who filmed commercials for a living and they were such a tight little unit. I think my name was down on the film as director, but a lot of good I was. Basically I wrote the thing, paid the bills and kept everyone fed. But if you don’t do things like this, what’s the point of living?

Q – So, why should readers give this work a try?

A – I just think it would be one of the most enjoyable hours of your life. But one mustn’t assume anything.

Goodbye Melaleuca: A Play in One Act →